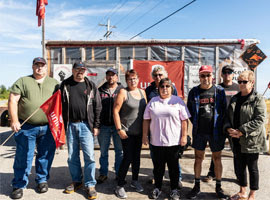 GANDER – Workers at D-J Composites in Gander have a new collective agreement after nearly two years locked out on a picket line after an arbitrator issued a final and binding decision.

“This shameful lockout is finally over because hundreds of Unifor members gathered in Gander to show solidarity with Local 597 to push for binding arbitration,” said Jerry Dias, Unifor National President.

The new three-year agreement for members of Unifor Local 597 comes after arbitrator John McEvoy released his decision, effectively ending the longest lockout in the history of Newfoundland and Labrador.

McEvoy selected the employer’s final offer.  However, this is one of those rare occasions where a loss is actually still a win.

In the face of arbitration, D-J Composites removed its most egregious demands, such as merit based pay, from its final offer and D-J composites accepted some of the union’s most important demands, including annual step increases for wages.

“After two years on a picket line, defending their rights, and fighting for a collective agreement, our members can hold their heads high. The solidarity we saw from across Canada made all the difference in bringing this dispute to a conclusion,” said Lana Payne, Unifor’s Atlantic Regional Director.

The challenge now is to ensure a smooth return-to-work process. Unifor will continue to pressure the employer, and its potential customers, to expand efforts to bring more production into the plant.=