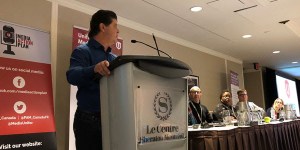 I read the tweet, and did a double take.

Here was Conservative leader Andrew Scheer, Canada’s anti-progressive, media-bashing “Trump in the North,” railing against Unifor — Canada’s largest media union — for being invited to identify an expert to sit on a technical panel to define what constitutes quality journalism.

The contempt in his tweet would have you think that Unifor, itself, was somehow responsible for administering a program that is a lifeline to struggling news organizations, many of which can barely keep the newsroom lights on.

News flash: We’re not. And Scheer knows that. But, hey, why not play fast and loose with the facts when it fuels Conservative Party fundraising, and fosters endless strings of conspiracy theories? A well executed playbook from the Republicans down south.

Part of me understands Scheer is simply playing the new game of politics. I get it.

But I get angry at what this blatant, intentional mischaracterization means for October’s federal election campaign. I’m always up for a fair fight. Go ahead and criticize the government’s plan to protect Canada’s independent press. Let’s weigh the merits of this plan against another and have a healthy debate.

But trashing a plan with misstatements and half-truths, and no plan of your own, is a different kind of fight — one Canadians must not be willing to play.

Scheer’s tweet circulated a satirical photo of elected Unifor officials taken in 2018, spoofing a controversial Maclean’s cover featuring Scheer, Doug Ford and a gaggle of Conservative Party cousins, billing them as “The Resistance.”

Scheer incorrectly stated Unifor officials have been “appointed to help decide” how new federal funds to support struggling news organizations will be distributed.

The truth is this is an independent panel of technical experts, including journalists, to define the terms of quality and professional journalism — a task best left to professionals, not politicians. Figuring out what constitutes proper journalism is a necessary precondition to any financial support — lest we cut cheques to every basement-dwelling news blogger.

Unifor, with a balance of seven other organizations, including journalist associations, worker organizations and media publishers (yes, the same ones who disproportionately endorse Conservative parties come election time), will recommend who can assist in these preliminary, technical discussions.

The panel has until the end of July to offer its directional guidance, and then will disband.

A completely separate panel will then be responsible for allocating funds. Unifor will have absolutely no role on that panel, nor should we.

There’s a lot at stake. More than 250 news outlets have either closed or merged in the last decade. Newspaper revenue dropped 64%.

Here’s what Scheer needs to understand: Losing news gathering capacity sucks the oxygen from our democracy and allows fake news to propagate.

Does Scheer really believe his own rhetoric? Does he really want to see the demise of our Fourth Estate? Scheer puts the very principles of truth and democracy at risk with this own brand of fake news.

He should be ashamed of himself.