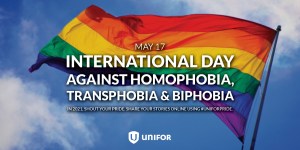 Unifor marks the 2021 International Day Against Homophobia, Transphobia, and Biphobia (IDAHOT) with solidarity for people of all sexual and gender minorities.

Unifor remains resolved to continue the fight against homophobia and transphobia through social change and the fight for human rights for all.

As we resurface after the pandemic and begin to build a better world, we must do away with the inequalities and oppression that lead to discrimination.

Unifor calls upon governments of all levels to recognise LGBTQ workers in recovery efforts and for the federal government to finally pass legislation to adopt a ban on so-called ‘conversion therapy’.

Conversation therapy is a dangerous, unfounded practice that often involves minors’ abuse and leads to lifetime trauma. The basic assumption that a person’s sexual orientation, gender identity or expression is something to be altered or corrected, threatens LGBTQ workers’ dignity and well being. This runs against the union’s position on supporting the rights of all workers.

Unifor is opposed to conversion therapy in all forms and supports efforts to put a stop to the practice through municipal, provincial, and federal bans.

The International Day Against Homophobia, Transphobia, and Biphobia and Pride will look different this year. Many local unions are organizing online events to unite community after an isolating year.