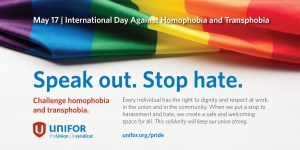 Unifor calls to End the Ban

The International Day against Homophobia and Transphobia, May 17, is an annual reminder that although progress has been made, there is further to go. Unifor joins the international call for action to address the inequality that too many, lesbian, gay, bisexual, transgender and queer (LGBTQ) people in our workplaces and communities face.

Unifor encourages all people to recognize and embrace May 17 as a day to support the ongoing struggles for inclusion, acceptance and respect of all LGBTQ people, including supporting the call to end the discriminatory blood donation policy here in Canada and Quebec.

LGBTQ people all across the country and around the world are faced with legal, social, and institutional barriers. It is these barriers that isolate and divide us. And it is time to tear down the barriers that we know to be discriminatory.

Historically, Canadian Blood Services (CBS) and Héma-Québec (HM-QC) imposed a lifetime ban on blood donations from men who had sex with other men at any point in their life time, and this ban dates back to the HIV/AIDS epidemic of 1977.

Today, the ban continues to exist despite science, research and an understanding of HIV/AIDS. It is a form of upfront discrimination.

Some changes have been made. The change has come from the thousands of voices that spoke up and took action. Today, instead of a lifetime ban, there is a one-year deferral, regardless of actual level of risk or health status. Unifor acknowledges that a one-year deferral is still a ban in principle, requiring celibacy for a year in order to make a life-saving donation.

This policy discriminates because it bans gay and trans people from donating based on their identity, not based on the nature of their sexual relationships, such as protected sex or monogamy. This policy is not based on science, and perpetuates homophobic and transphobic assumptions about HIV and AIDS.