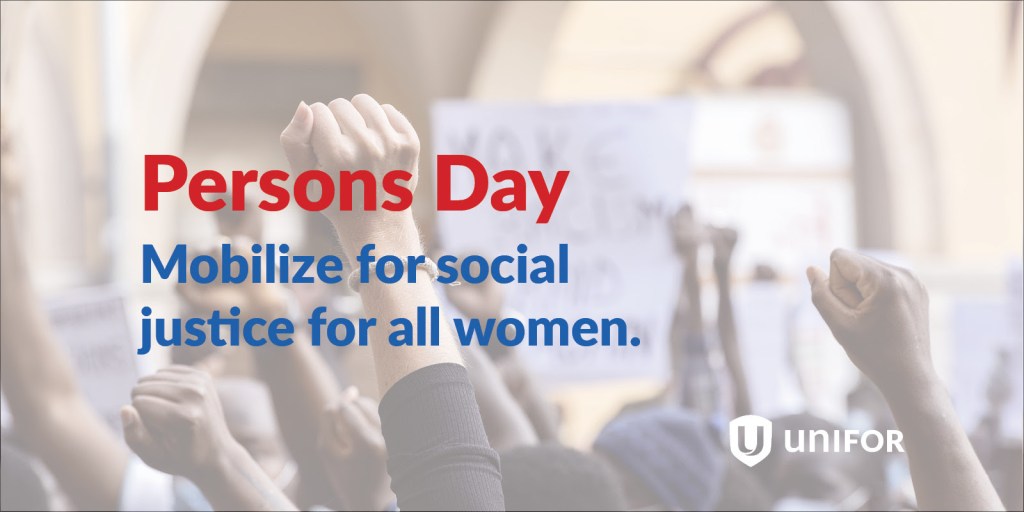 Each October 18, Canada celebrates Persons Day. This day marks the day that some women were declared persons under the constitution gaining the right to stand for or be appointed to public office including the Senate of Canada.

In the 91 years since that ruling, we see that women’s equality continues to be uneven – both in comparison to men and within women as a group. During the pandemic this fact has been increasingly highlighted.

Women in Canada face more exposure, higher death rate, and poorer labour conditions than men since the pandemic was declared. When we examine which women are most acutely affected, Black, Indigenous and women of colour are overrepresented. While some women have achieved some measure of equality, this is not true for women experiencing multiple and intersecting forms of discrimination.

In the shadow of these new and longstanding inequities, Canada’s federal and provincial governments still resist the change that is necessary in order to make things better.

The anniversary of the Final Report of the Murdered and Missing Indigenous Women and Girls Inquiry passed without concrete action.  The groundswell of support for Black Lives Matter has resulted in only a minority of governments taking concrete action including pledges to collect race-based data. A famous author’s attack on the lives and humanity of transwomen has gained traction in many corners. And a recent DAWN Canada report underscores that women and girls with disabilities face multiple barriers to accessing employment, health services, sexual and reproductive rights, and are also more at risk of experiencing gender-based violence.

Unifor leaders and members continue to mobilize for social justice throughout this pandemic. With our #BuildBackBetter campaign, we push for structural changes to address inequality, including gender inequality. Campaigns in our health care and retail sectors highlight how racialized and gendered these sectors are, and those effects on workers. Unifor pushes governments and employers to move beyond empty gestures of thanks and instead move toward living wages, dignity and decent working conditions. The temporary measures of pandemic pay must be made permanent for the front line workers whose value should have been recognized all along.

On Persons Day, when elections are taking place in two of our provinces, the importance of electing progressive governments is paramount. We mark the anniversary of the first women being able to stand for office and we highlight that we have much more to do to ensure diversity within decision-making positions. Critical issues such as reproductive rights, child care programs, pay equity and paid domestic violence leave risk being rolled back or never realized through the rise of conservative governments.

To truly acknowledge women as persons, structural changes that seek to disassemble the barriers built by racism, sexism and more need to be made. Activism, strengthening our unions, and electing progressive governments are key to this goal.