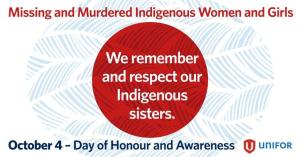 The pain of loss and of justice denied echoes through our history, our present and will echo into our future if we fail to act. Unifor is committed to working towards reconciliation with Indigenous people and creating a more equitable, inclusive union that celebrates and support First Nations, Inuit and Métis members.

Vigils are being held across the country this year, and concerned citizens and Indigenous community members will gather together to draw attention to this crisis and demand action from all levels of government to stop the violence.

In Winnipeg, members will participate in events, including a vigil, in a show of solidarity and support on Manitoba’s official day to honour missing and murdered Indigenous women and girls.

Members are encouraged to attend vigils that are organized from coast to coast to coast. The Native Women’s Association of Canada compiled this list of vigils to remember our stolen sisters.