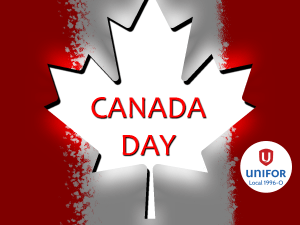 Canada Day is considered the national birthday of Canada. July 1st celebrates the anniversary of Canadian Confederation which passed in 1867.

Canada continued to remain a British colony from 1867 until the passing of the Constitution Act in 1982 in which Canada gained full independence.

In Light of the current atrocities being uncovered at residential schools it is prudent to point out that Canada Day has attracted a negative stigma among many First Nations communities, who feel that it is a celebration of the colonization of indigenous land.

This Canada day let us both celebrate everything that makes this country great and brings us together while also acknowledging that we as a country must do better for all the different communities that reside within Canada.