REGINA – Unifor is seeking assistance from the Federal Mediation and Conciliation Service after weeks of unproductive talks with SaskTel in an effort to negotiate a new collective agreement for 3000 workers.

“It is frustrating that SaskTel is clearly unwilling to engage in meaningful negotiations on the issues identified as the priorities by our members,” said Jerry Dias, Unifor’s National President.

Unifor’s bargaining committee has declared an impasse in bargaining and hopes the assistance of an independent third party will move talks in the right direction towards a fair tentative agreement for the hard working members who keep Saskatchewan residents connected to each other and the rest of the world.

“Our members are disappointed. They do important work for this province and crown workers deserve more respect than what they are seeing from the employer at this point in negotiations,” said Dave Kuntz, President of Unifor Local 1S.

The bargaining committee has yet to receive monetary proposals from the employer, despite repeated requests.

“Members have been clear that job security, mental health and fair compensation are priorities in these negotiations and all we are seeking is a fair deal,” said Penny Matheson, President of Unifor Local 2S.

Crown workers are continuing to show incredible solidarity with their bargaining committee by wearing “Stand up for Crown Workers” T-shirts and posting photos on social media across the province. The union will continue its public awareness campaign that asks residents to sign a petition in support of crown workers.

This is what solidarity looks like as Crown workers in Saskatchewan send the Moe government a powerful message as they bargain new collective agreements.
It is time to support our crowns by investing in the workers who make them great! 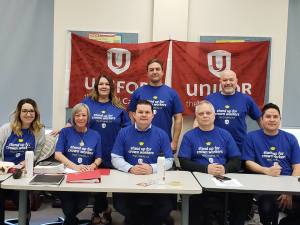