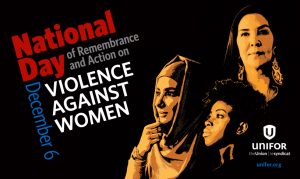 Unifor marks December 6, the National Day of Remembrance and Action on Violence against Women with a call to action to make our workplaces and communities safer.

As we remember the 13 engineering students and one worker who were murdered at l’École Polytechnique de Montréal in 1989, we also commemorate all the missing and murdered Indigenous women, trans women, and all women whose lives have been harmed or lost to gender-based violence.

Unifor has been actively supporting an International Labour Organization Convention and Recommendation on violence and harassment in the world of work, with a strong focus on the gender dimension including domestic violence. The Convention and Recommendation will create international standards and will lead to stronger legislation and tools to address violence and harassment. We are asking all members to call on the Canadian government to do its part to make sure this Convention is passed and adopted.

On December 6th, Unifor also acknowledges that one of the first calls to action from the survivors of the Montreal massacre was for better gun control. Gun violence has increased recently and we know that guns are the most commonly used weapon in domestic homicides. This is why our union supports the Coalition for Gun Control’s current campaign to ban assault weapons and handguns. We invite on our members to sign the petition at www.triggerchange.ca.

Each year, Unifor supports the crucial work of women’s shelters across the country through donations between November 25 and December 6. These donations are a small but important contribution towards the chronically underfunded shelter system.

Our greater goal is to end the need for shelters and work toward safer workplaces and communities. Join us today and every day.